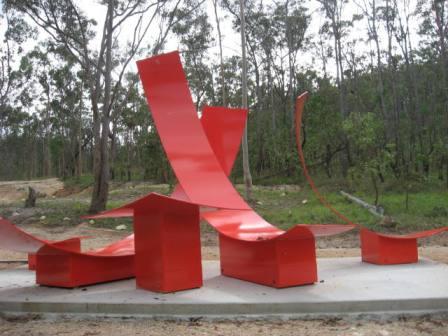 The sculpture interprets rolling hills, waterfalls and through it's colour, the outback.

In 1980 the then Eacham Shire Council commissioned Tom Risley to design, fabricate and install a large public artwork outside the Council Chambers in Malanda.

The completed work, shaped to represent the interlocking hills of the Tablelands included a water feature.  However when the Council changed Mayors the sculpture was removed, being blasted off with an oxy-torch.  This created great concern in the Australian art world and also a large public protest against the removal, as the Sculpture was quite unique and  an asset to the Shire.  The work remained quite damaged in the Council depot for many years.

After amalgamation of the four Tableland Shires, permission was sought and granted from the Tablelands Regional Council - provided there was no cost to Council - to bring the Sculpture to Tom's home town - Herberton.

Tom's many friends banded together to transport, repair, repaint and install the artwork on this site, which was chose by Tom himself.

This artwork remains the largest steel fabrication ever undertaken by Tom.
Its setting now complements its resonance with the shape of the hills and the vibrancy of outback colours.  The sculpture engenders a questioning about what art is and can be.