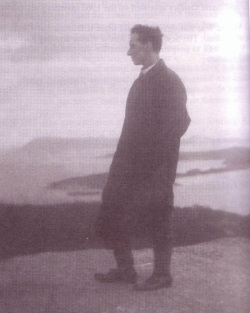 ‘Padre’ White lived a life of service to his communities.

Rev. White is widely recognised as one of the instigators for an Anzac Day Dawn Service from as early as 1923, particularly at Albany (W.A.). From there he had watched the first AIF troopship convoys leave Australian shores in late 1914, carrying forces for subsequent deployment at Gallipoli. He was determined for these remembrance services to always be commemorated.

He married Clara Elsie Welman (1880 - 1952) in 1918, and was father of John Francis (b.1919). Both had military service overseas.
A humble, unpretentious man, known affectionately as ’Padre’ White, he wished his grave to bear only the identification - “A Priest ”.
His simple unadorned grave lies in the Anglican Section of the Herberton Cemetery Row 27 Plot 20.

27 Aug. 1883 Born London   Father- Walter (of ‘independent means’), Mother - Emma
1903 - 1906 Attended C.of E. College of the Resurrection,  Mirfield, West Yorkshire
1906 Awarded B.A. ,  University of Leeds
1909 Ordained as Priest  (by Bishop of Wakefield)
1908 - 1912 A Deacon, then Curate at Elland, Diocese of Ripon, W. Yorkshire
(?) Reportedly worked at All Saints Orphanage, Lewisham (London).
A chronic and painful middle ear condition (otitis media) worsened, causing  perforated eardrums and partial deafness, and a decision to move to a warmer, drier climate
1912 - 1916 Migrated to Australia aboard ‘SS Persic‘, arriving at Albany, W.A. in October as a Priest in the Bush Brotherhood of St. Boniface, Diocese of Bunbury
Served at the Brotherhood’s foundation church in the town of Williams    (200km. north of Albany)

24 Feb. 1918 While visiting Albany after discharge, ‘Padre’ White was invited to conduct the  11 a.m. Sunday service at St. John the Evangelist C. of E.
[ A special eucharist (mass) - a ‘Requiem for the Battle Dead’ -  may have  been included, followed by a group walk up Albany’s Mt. Clarence to view  the site of the Nov. & Dec. 1914 departures of the 1st AIF troopship  convoys to Egypt from the harbour below ]
1918 Chaplain at Caulfield Military Hospital, Melbourne
19 Jun. 1918 Married Clara Elsie Welman ( ex Army nurse), at Woollahra, Sydney
1919 Curate of a ‘St. John’s Church‘(?), Melbourne
22 May 1919 Son, John Francis, born in Melbourne. Living at Balaclava
1920 Relieving at Brunswick
Early 1923 Appointed to Broken Hill, Diocese of Riverina (N.S.W.)
Prior to taking up that posting, Rev. White returned to Albany for a short  while, relieving the Rev. H.T. Wightwick at St. John’s there.
[ It is reported that, early on Anzac Day that year, he again climbed up Mt. Clarence with some 20 others. It is possible that this informal commeroratiion included a recital from ’The Ode’* and, probably less likely, even the floating of a wreath from a boat on the Sound below ? ]
13 May 1923 Inducted (at Broken Hill) as Rector of St. Peter’s Church, and Archdeacon of Broken Hill
28 Oct. 1928 New church dedicated
11 Sep.1929 Rev. White’s last Mass at Broken Hill , prior to departure for Albany
Sep. 1929 Inducted as Rector of St. John the Evangelist Church, Albany (W.A.)
25 Apr. 1930 At 6 a.m. on Anzac Day, with a congregation of 30, a Holy Communion  service was held in St. John’s, followed by a wreath laying at the nearby  War Memorial
[ White himself records this as “First Dawn Service held in Australia” ]
25 Apr. 1931 A publicly advertised Anzac Dawn Service at St. John’s (at 4:30 a.m.), and a  Commemoration on Mt. Clarence which included ’The Ode’ recital and the  simultaneous release of a wreath into King George Sound from a boat in  Princess Royal Harbour
May 1938 Transferred to Forbes (N.S.W.), as Rector of St. John’s Parish Church, Diocese of Bathurst. Still affectionately known as ’Padre’ White
1951 Became a Canon of All Saints Cathedral, Bathurst, still serving at Forbes
14 Oct. 1952 Wife Elsie died at Sydney
May 1954 Retired from service at Forbes, aged 70. (Before leaving Forbes, he gave  away many of his possessions - including a portable altar and vestments he  had used in tent chapels which he set up in Flanders in WW1. These are  now treasured at St. John’s, Albany)
Moved to Herberton (FN Qld.) to assist the Anglican Sisters of the Sacred  Advent who ran St. Mary’s Girls School there. ( Their grand main school  building had been destroyed by fire in March 1952 )
24 Sep. 1954 Died in Herberton District Hospital, 3 days after a duodenal ulcer ruptured, causing toxaemia (blood poisoning) and cardiac failure
25 Sep. 1954 Buried at Herberton Cemetery - his grave, as he requested, bearing only a  simple white cross with the inscription ‘A Priest ’

20 Feb. 1915 Embarked (with other nurses) at Sydney for England on ‘Ballarat’
24 Apr.     “         Applied to join Queen Alexandra’s Imperial Military Nursing Service Reserve
( ? ) Embarked for Malta on ‘Mongolia’
Served as Staff Nurse at Malta, and on a hospital ship (?)
Jun. 1917 Still serving, based at Abbeville in France
20   “       “ Matron-in-Chief, British Expeditionary Forces, France & Flanders,     requests  that Nurse Welman be returned to England
Early 1918 Returned to Australia

1958 All Soul’s War Memorial Church, Wirrinya   (40 km. SW of Forbes), NSW.
3 stained glass windows, depicting Army, Navy, Air Force and Nurses personnel,dedicated as the ’Arthur Ernest White Memorial Windows’ on Anzac Day, 1959.
This church, built with voluntary labour, was commenced with Rev. White’s strong support during his time in the Forbes parish. It was completed in 1956, after his   departure and subsequent death.
The windows, also called the ’Dawn Service Windows’, were the community’s  tribute to his service.


1981 Victoria Park Cenotaph, Forbes   (50 m. from St. John’s Anglican Church).
A memorial plaque placed by the Forbes Historical Society.
The R.S.L. Services Memorial Club, Forbes, reportedly also had a wall plaque mounted, but this has since been mislaid during renovations.

2011 Herberton Cemetery, Nth. Qld.
Commencement of building ‘The Padre White Memorial Chapel ’ - dedicated   “To All Who Serve”. A project of Herberton’s Lions Club and RSL Sub-branch, strongly supported by the local community. Some  $50,000 has been expended.
The chapel structure is set in a restful Reflection Park adjoining the         town’s historic hilltop cemetery and surrounded by rolling bush clad hills. Its  design is based on a World War 1 field tent, reminiscent of a typical tent chapel which Padre White reportedly established for the use of the troops he served. On  a 60 sq. m. hexagonal base, its striking pyramidal steel roof is pitched steeply
to a height of 7 metres. At its apex is a simple silver cross, angled so as to be lit  up “at the going down of the sun” on each Remembrance Day (11/11). Beneath the ’tent’, the chapel will be only partially enclosed by walls bearing memorial plaques and information commemorating those who have served the  district (e.g., in military services, police, fire, rescue, health, etc.).
Padre White’s ministry, and his connection to this peaceful resting place at  Herberton, will be a prominent feature.

The ‘Ode of Remembrance’, partially recited by ‘Padre’ White at his Anzac Day observances on Albany’s Mt. Clarence is, in full, the 4th verse of the poem ‘For the Fallen’, composed by English poet Laurance Binyon in 1914.
It includes the lines “ At the going down of the sun, and in the morning, we will remember them”. These words, or closely similar versions, have been attributed to ’Padre’ White. This origin is clearly incorrect.
The Ode was adopted and continues in use for all Anzac Day observances to the present day.